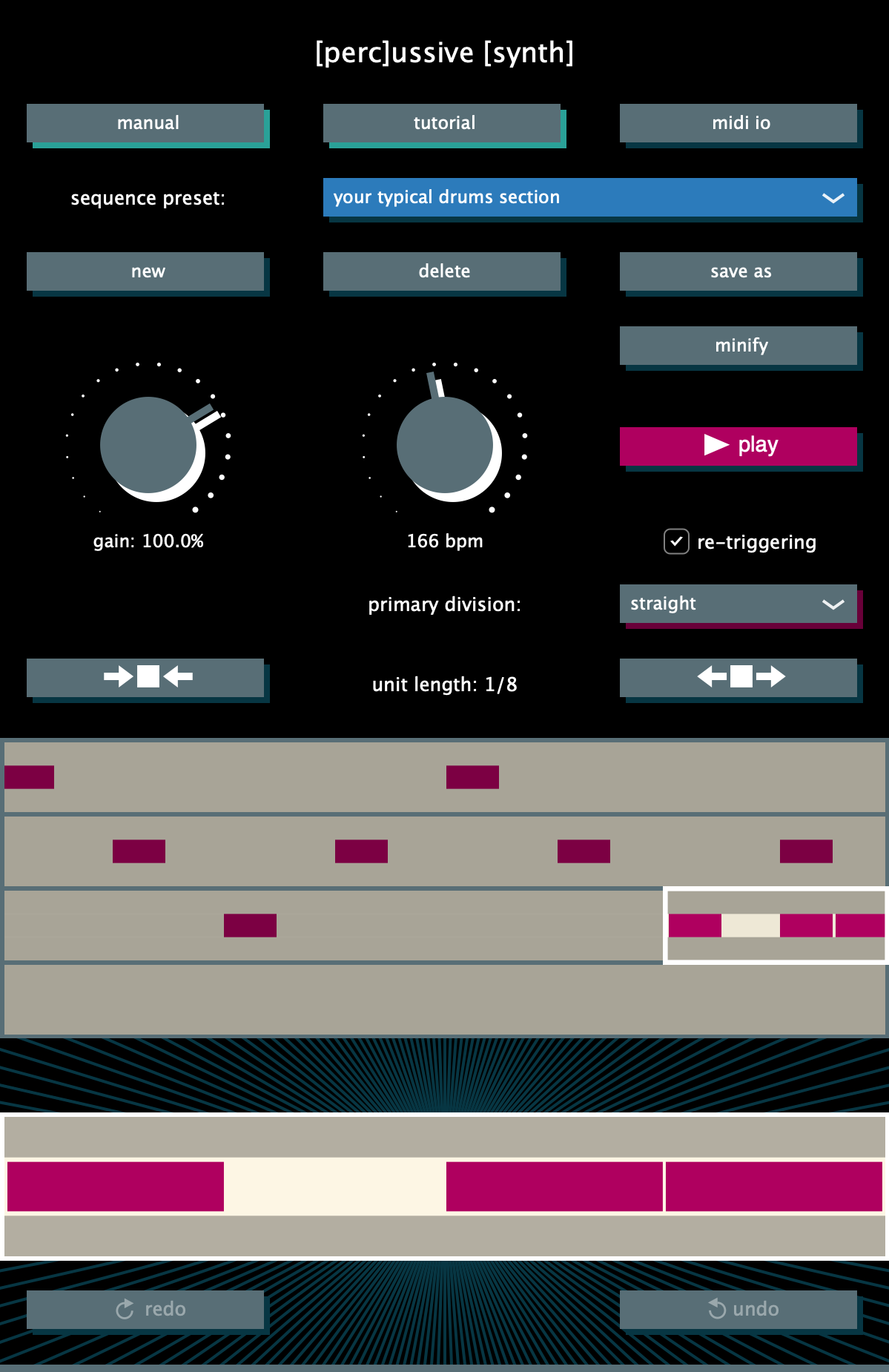 This is a synthesizer inspired by analogue design, intended to be percussion. It can accompany you while you jam, be your groove experimentation space, and be a source of recording material you may export and mix in a DAW. 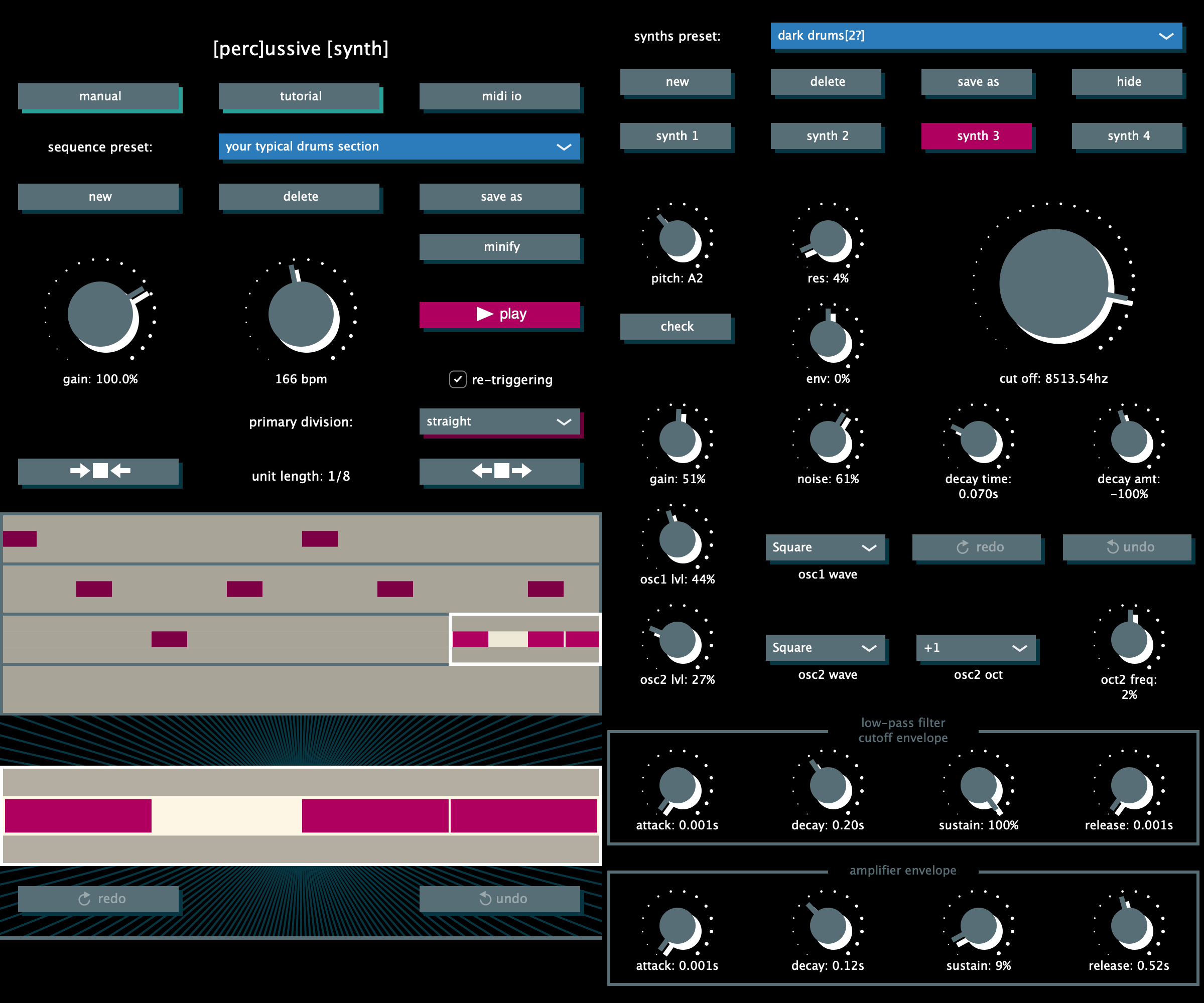 The app consists of two parts - the synths engine and the sequencer.

Synths engine has 4 voices, two oscillators and the white noise generator each.

Track length is fixed - 2 bars, or 4 halves, which is the longest possible note. All 4 tracks are always visible in the navigator, you can select a track and its active region by tapping on it.

An active region can be extended or shrunk using the spread and pinch gestures over the navigator, or buttons above it.

Notes may be entered and erased using workspace under the navigator. 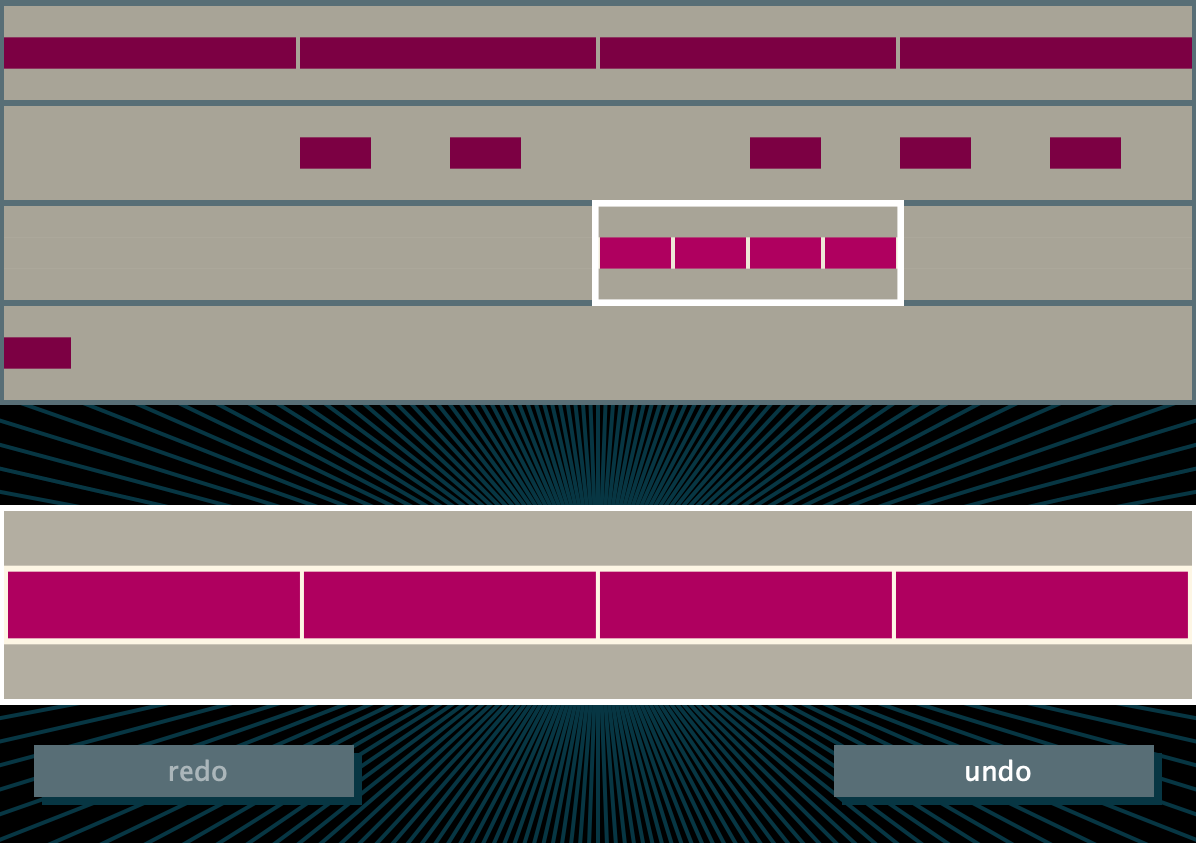 Workspace always corresponds to the active region of the navigator, and always consists of 4 note positions, that can be toggled On and Off. 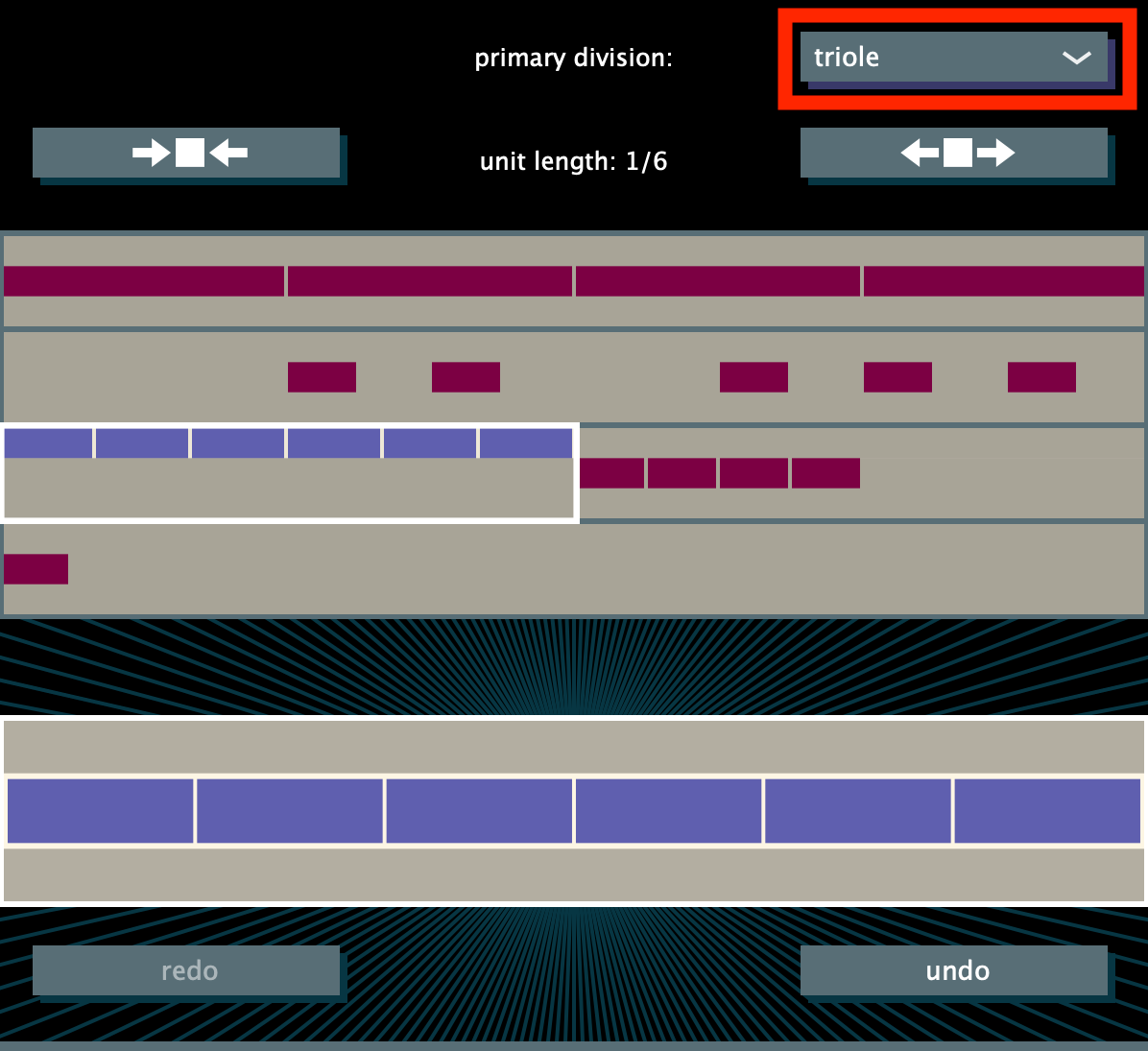 It's also possible to use odd subdivisions - trioles and quintoles, in that case, workspace is divided into 6 and 10 positions respectively. Each track in Navigator is vertically divided on 3 sub-tracks, one for each subdivision. Straight subdivision is coloured in magenta and goes in the middle, trioles are purple and on the top, quintoles are cyan and in the bottom of the track. 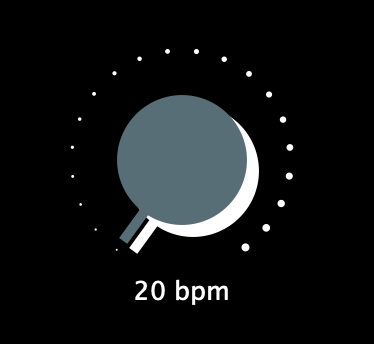 Even though track length is fixed to 2 bars, the speed at which it's played can be as low as 6bpm, which allows creating a longer cycle by adding more notes played at low bpm. Also, bpm can go as high as 9999, which allows experimentation with drone sounds. The app won't send midi out for bpm over 500.

Notes with different subdivisions can overlap. If re-triggering is On - a note will restart after an overlap ends, it allows for the creation of interesting rhythmical patterns. 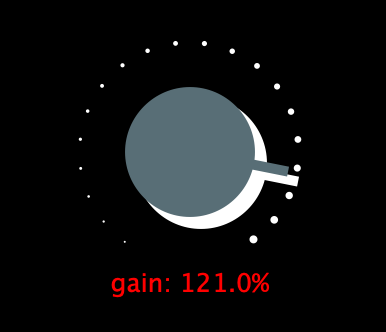 Also, if master gain goes over 100% the sound will be distorted. 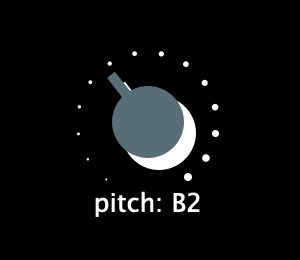 A synth can play only one note during the whole length of a track, this is an acceptable limitation for a percussive instrument. The pitch of a note a synth is going to play can be selected using this knob. 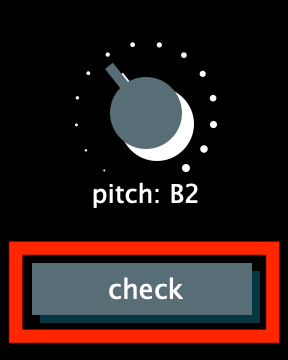 While editing synth params it's handy to hear it without starting the sequencer, use the "check" button for that. The synth design is inspired by analogue synthesizers, it has the following modules - 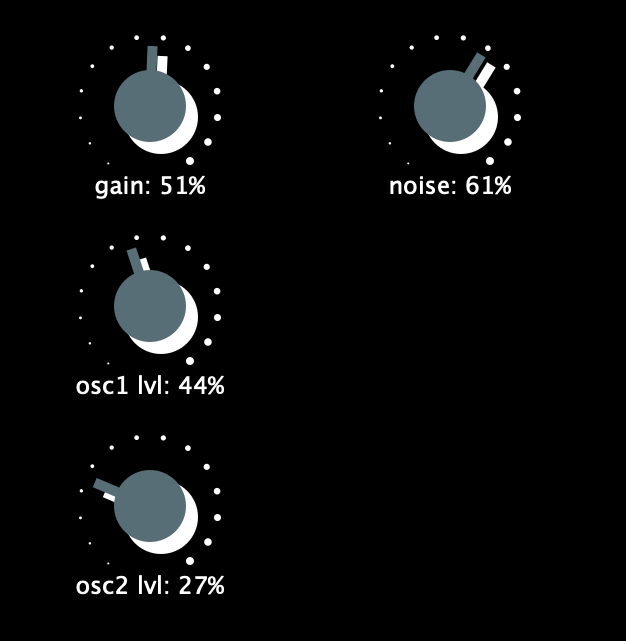 There's also an oscillators decay section - you can set decay time in seconds and decay amount quantized to octaves and fifths, it allows for the creation of drum-like sounds.

have separate presets and undo histories.
Maximum undo history storage is 1000 changes, so be careful and save your presets regularly.

The sequencer can be minified so that only preset selection, gain and bpm knobs, and play button are visible. 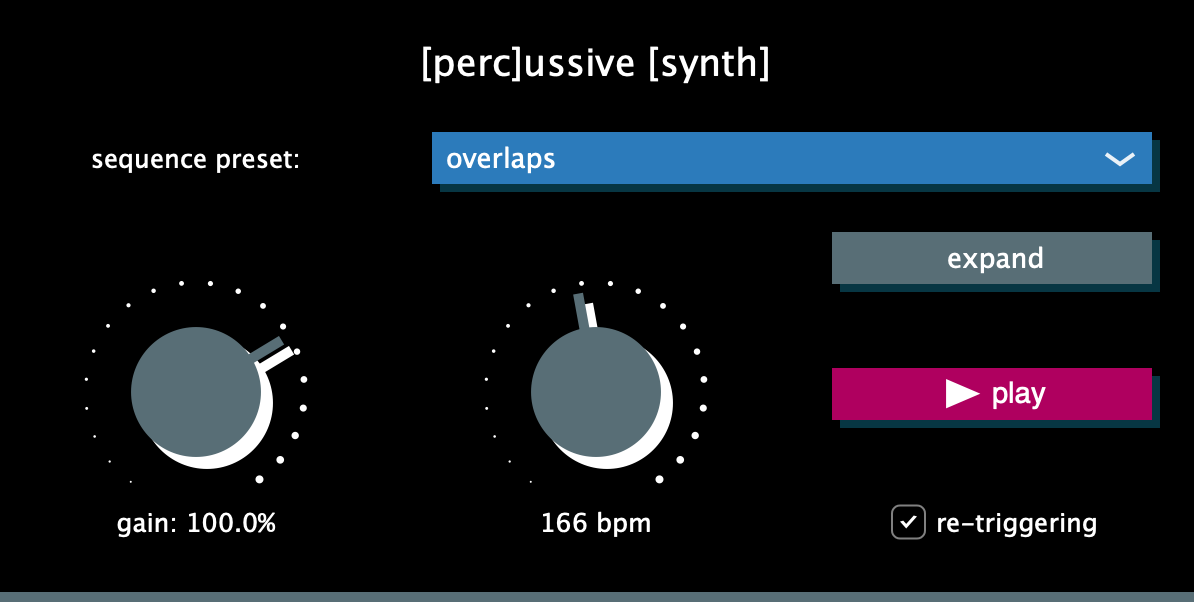 May be handy if you want to change sequence presets and tweak synth params while it's playing.

To scroll you can grab the app anywhere and drag to scroll as you do in any other app, but if you grab a knob - the scrolling will be disabled.
Use two fingers to scroll even over knobs.
Navigator is an exception - two finger gesture is used to edit active region width instead of scrolling.

All knobs can be double-tapped to reset to the default value, for example for cut-off envelope it's 0%, 50% for sustain, etc. 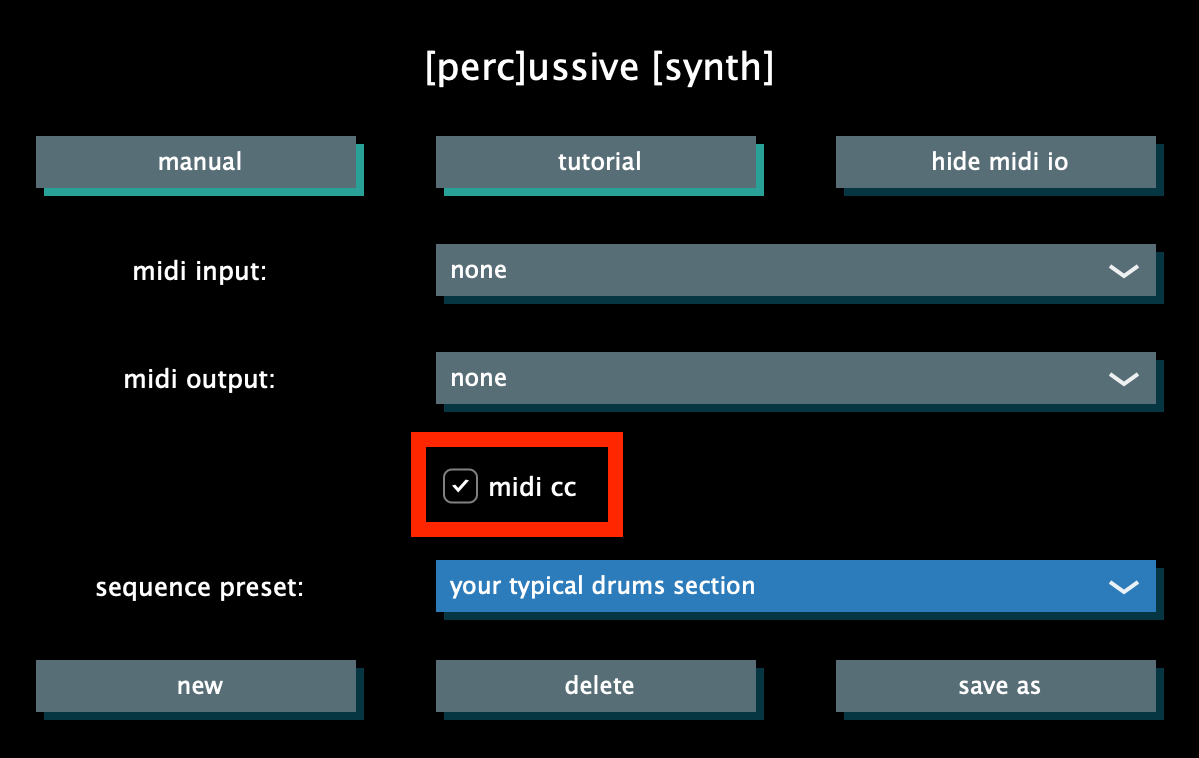 With midi cc enabled you can control synth params from outside by sending midi cc, use midi learn to connect params in the app to your daw.

Each synth (and hence each track) uses its own midi channel from 1 to 4.

You can use a single synth as an AudioUnit. In this case, the app's features are limited as you only have the modular synth engine. On the other hand - you can use it as a more traditional synth using a keyboard to trigger different notes. Use multiple units to get polyphony.

At the bottom of the app, there is a recorder - when "quantize to sequencer cycle" is on, pressing record will start the sequencer, and pressing stop will hold recording On until a sequencer cycle ends.

In the end, there's the extra submenu.

Here you can export and import sequence and synths presets as files.
With velocity sensitivity On you can toggle knobs' movement behaviour to be able to fine-tune any value if you move your finger slowly. Bpm knob is an exception - it always has velocity sensitivity On.
Also, you can turn on quadratic ADSR, which means that attack, decay, and release, will change in a non-linear manner (imagine a right size of a convex quadratic graph).

Kudos and my deepest appreciation to the creators of the JUCE framework, Solarized colour palette, and Moog synthesizers for the beautiful journey and the huge inspiration their synthesizers gave me.

My name is Vadym Rostok, I'm the creator of Percussive Synth. Please feel free to contact me if you have any questions - vadym@percussive-synth.rocks
Home